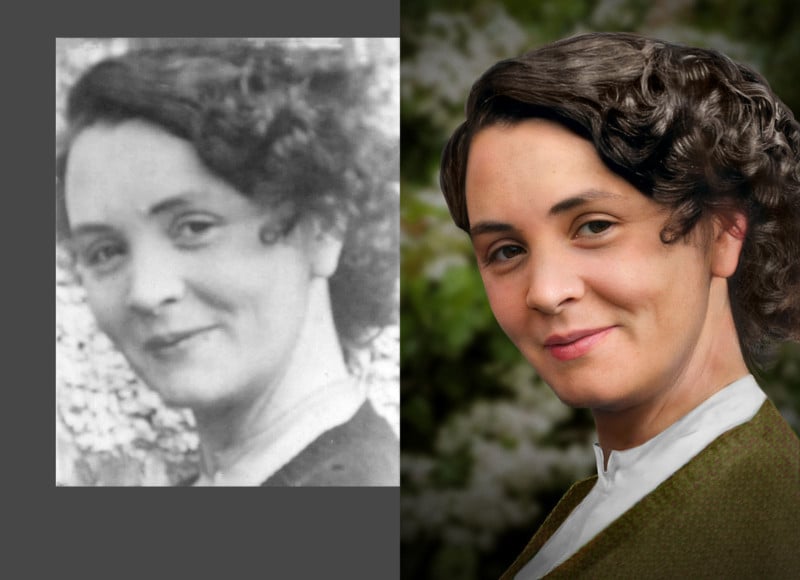 An anonymous digital artist is creating impressive transformations of old black-and-white photos, reimagining them as enhanced and colorized portraits that look as though they were shot in the modern-day.

The artist, who goes by IDoArtForYou on Reddit, most recently wowed the subreddit /r/pics with the above before-and-after that shows the result of his colorization work on a photo of a woman from around half a century ago.

Taking on a Stranger’s Request

IDoArtForYou, who is a 3D character artist by profession and who has done some semi-professional photography work in the past, first saw the old photo when it was posted to the subreddit r/estoration. 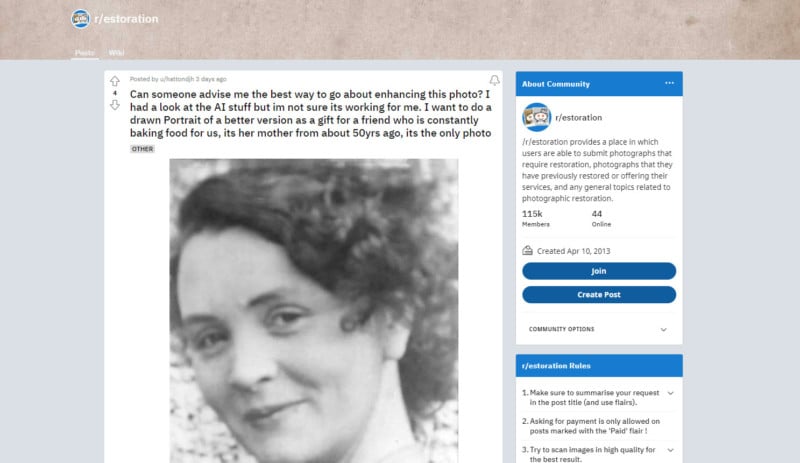 “The original photo was posted to the r/estoration subreddit where anyone can post a picture and have to hope it restored by someone in the community,” IDoArtForYou tells PetaPixel. “It was posted a couple of days ago by a guy who wanted someone to enhance it so he can use it as a reference to sketch the image as a gift to a friend of his who bakes for them. This lady in the picture is the baking lady’s mother.

Some members of the community did try their hand at restoring the photo, but IDoArtForYou wasn’t impressed with the results, so he decided to give it a shot himself.

The first thing IDoArtForYou did was to fix the damage in the photo and address overexposed areas. He enlarged the canvas and filled in missing areas.

“I did that in this case but ended up replacing the entire background anyway because there was barely anything there,” he says.

After removing as much noise as possible, he then spent hours finding details and textures from stock photos to enhance things like facial features, skin, hair, and clothing.

“Spend more time trying to morph and blend them all to match with the original as much as possible,” IDoArtForYou says. “Improvise when there’s no information. Spend a lot of time on this step because the more accurate you can make it, the better the final result will be.”

Next came the colorization. He first added a base color coating over the entire photo. Next, he did his best to colorize each of the details in the photo as realistically as possible based on what they are.

“Study the materials in the image and try to overpaint on all of them trying to replicate the material effects — glossiness, refraction, reflections, specular detail, subsurface scattering for the skin and transparent materials, etc,” he says. “The more time spent on this, the more realistic the final image will be.”

Once the colorizing is done, he adds some noise and distortions intentionally to make the result look more like a real photo again and less like a digitally painted image.

The last step is to do final color grading, lighting fixes, and minor touchups to correct anything that stands out too much in the image.

“This one took around 12 hours over a 2 to 3 day period,” IDoArtForYou says. “I got sloppy towards the end once the face was done. Hence the bad work on the clothing, etc.”

As you can imagine, the person who originally posted the photo was very impressed with the result — his first response was: “That’s insane.”

A Closer Look at the Process

A previous colorization project IDoArtForYou did offers a behind-the-scenes look at his process. The monochrome photo was off-center and had physical damage across the print.

In this case, IDoArtForYou documented the entire process in a 34-second animation.

Not Restorations but Reimaginings

IDoArtForYou does not consider himself a photo restoration artist, but rather someone who aims to provide the world with a different view of history — reimagining the photos rather than restoring them.

“Rather than restore an older image, my goal with these images is to try and make feel like they were taken today,” he says. “Because looking at black-and-white pictures often skews our view of what we are looking at. It makes us feel like we’re looking at a time long past when in truth, it is at most 100 years. And that’s nothing in the grand scale of things.

“So my little hope with these ‘reimaginations’ is to build a bridge that lets us view these people and times with a view that we are more accustomed to today.

“I understand the nostalgia of black and white images and I love that myself, but this is a small effort to build a different lens at looking at [historical photos].”

IDoArtForYou has been doing art for 16 years now, but his digital colorization work has so far been a side hobby while his main job involves 3D art.

“I’ve been exclusively doing 3D stuff for so long that I felt I wanted to explore more 2D and photograph avenues,” he says. “So I made this account explicitly to tend to Photoshop requests and restorations of random people.

“And it makes me super happy to see their reactions when their loved ones’ photos are restored. Amazing feeling.”

He doesn’t take paid work, but he does keep his eye on messages that arrive in his inbox — which has been flooded with hundreds of requests after his latest viral hit — to see if anything catches his eye.