The BYU football team honored the kid cousin of a star defensive back after the 9-year-old died tragically in his sleep – bringing his family to practice and bestowing upon him the title of ‘True Blue Hero.’

The Gagnier family, of Eagle Mountain, Utah, lost their nine-year-old son Logan unexpectedly last Friday after a fun night of playing with his cousin, eating his favorite junk food, and FaceTiming his older brother Ryan, who was out of state we have a Latter-Day Saints mission.

Logan, who went to bed appearing healthy, was found dead by his older sister on Saturday morning in his bed from an unknown cause.

On Thursday night, the Gagnier family got to meet the players of the BYU team Little Logan hoped to one day play for. His cousin, Tavita Gagnier, is a defensive back on the team who recently returned to practice after an injury.

Logan’s mom Rebecca told Fox 13 that this has been ‘one of the hardest weeks of our lives,’ as she stood in her new jersey and BYU hat.

‘Just seeing that so many people care and share the burden just a tiny bit meant the world,’ she told Fox 13. 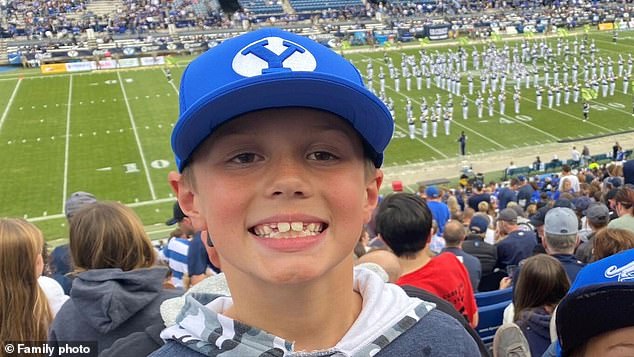 Logan Gagnier (pictured at a BYU game before his death), nine, died unexpectedly last Friday night from an unknown cause after spending a fun day playing with his cousin, eating his favorite junk food, and FaceTiming his older brother Ryan, who was out of state on a Latter-Day Saints mission 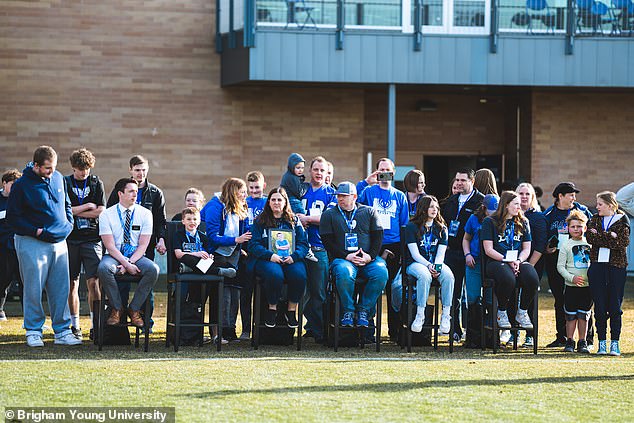 The Gagniers (pictured sitting) were invited to BYU’s practice on Thursday night to pay tribute to the team’s new ‘True Blue Hero’ Logan, who is now an honorary member of the team. Little Logan, who just recently advanced from flag to tackle football, hoped to one day play for the college team 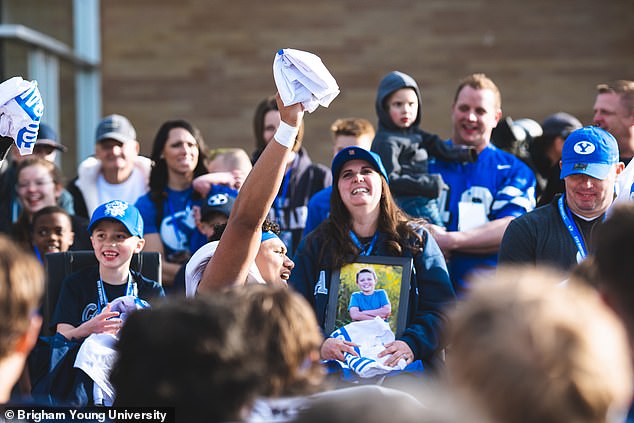 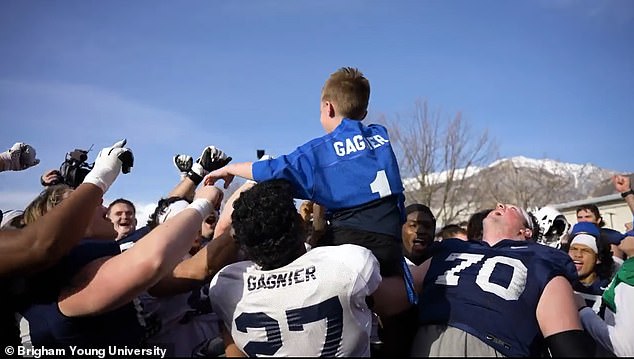 Logan’s cousin, Tavita, said he was at home when his father got the call to say that the boy had died.

‘It’s crazy stuff, but my little cousin went to bed and he didn’t get through the night. We just immediately went over and gave them our love. I just thought like: ‘What better way [to] give them a taste of BYU Nation’ and just love them up, you know.’

‘To see this happen, I felt like it would be the best, if we gave them the best. It’s what they deserve,’ he said. ‘They’ve always been about service.’

He said he was ‘awesome’ to have his family come and watch practice, although he said he felt pressured to ‘do something’ to show off.

The team sang Logan’s name as they greeted the family and offered them BYU hats, beanies, ties, and customized jerseys with their last name printed on the back. Logan’s older brother Ryan – who was out of state on a Latter-day Saints mission when his brother died was seen smiling in the video as he wore a BYU cap and clutched the t-shirt in his hands.

The little nine-year-old boy, who cause of death is still unknown, hoped to one day be a part of the team and is now being honored as ‘True Blue Hero,’ making him an honorary member of the team.

His uncle, JD Sheppard, also said Logan would ‘turn on YouTube BYU’s Top 100 Plays and he would watch it on repeat.’

‘Our whole family loves BYU football, but Logan loved it on the next level,’ he said. Logan had also advanced from flag to tackle football this year, motivating him even more to play for the college team. 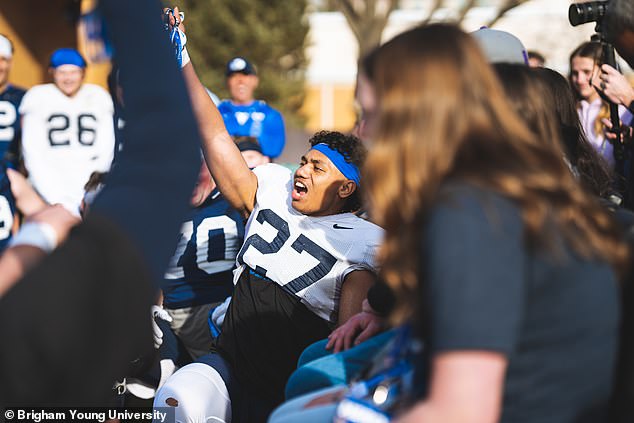 Tavita (pictured in jersey 27) presented the family gifts for every day of the week, including ties – ‘for church!’ – t-shirts, hats, and customized jerseys with the family’s last name printed on it 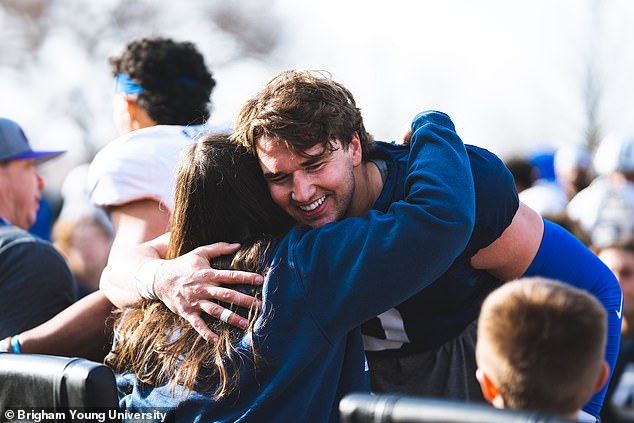 Rebecca was seen hugging a player at the event 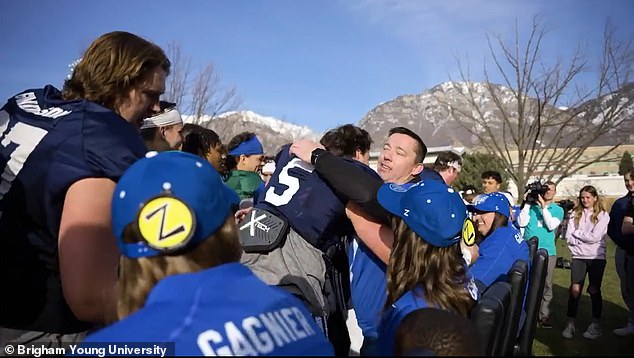 Logan’s father Garth was also seen hugging and playing and said: ‘As hard as it is to lose him, I just know that there’s a piece of him here, and he would want that. And that’s just special

With that in mind, the team offered the family a special gift.

‘I know it’s all about family,’ Tavita said as the team kneeled around the family. ‘I know [Logan] was all about family.’ Logan’s mother Rebecca clutched a photo of her son in her lap as the family received gifts and tried on their jerseys.

‘We know that Logan is going to be with us this fall,’ Tavita continued. ‘So we wanted to give you guys some special tickets to our first home game.

Head coach Kalani Sitake, who just recently renewed his contract with BYU, told DailyMail.com on Thursday morning that the team was ‘saddened’ by Logan’s passing.

‘We have all been truly saddened to learn of Logan’s unexpected passing and have offered our deepest condolences to Logan’s family on behalf of the BYU football program.

‘Logan’s cousin, Tavita Gagnier, is a member of our team. In learning of Logan’s passing, our entire team has been able to feel the great passion and support Logan always had for BYU football during his life and we truly wish for his family to feel of our love and support for them at this time,’ head coach Kalani Sitake told DailyMail.com on Thursday morning. 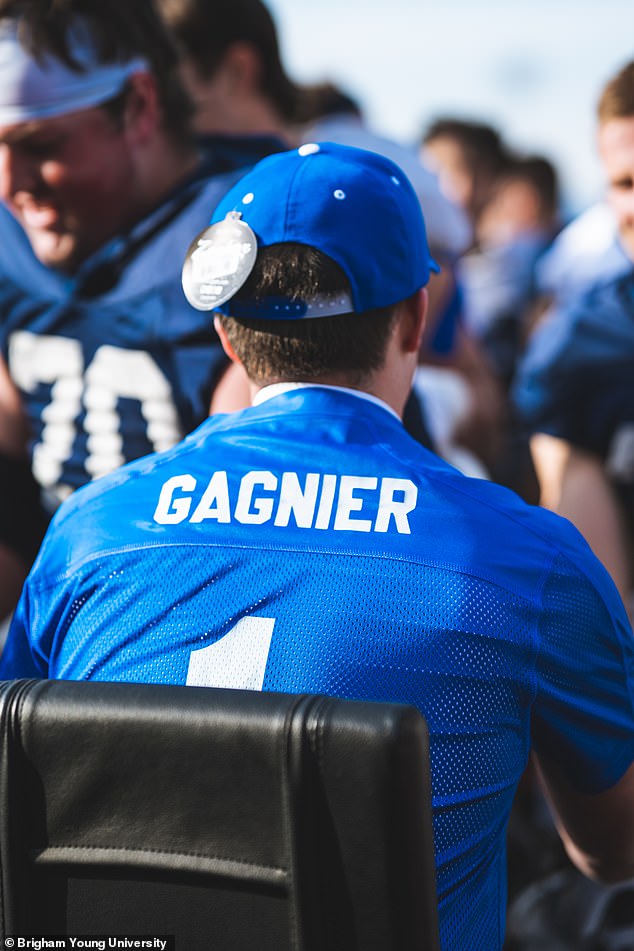 Older brother Ryan (pictured), who was away on a mission trip at the time of his brother’s death, was seen wearing his new jersey and BYU hat at the event 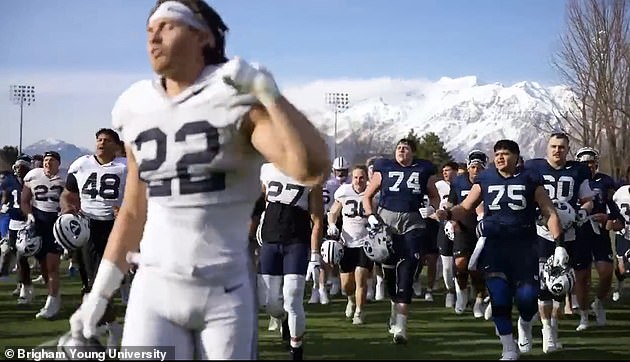 The team also told the family that they would ‘pray’ for Logan before every game.

‘They said: ‘Don’t worry, every time we go out on the field, we’ll pray for Logan and he’ll run out with us,” Logan’s father Garth recalled the team telling him on Thursday.

‘As hard as it is to lose him, I just know that there’s a piece of him here, and he would want that. And that’s just special,’ Garth said at the event.

The family said they will remember Logan by the joy he brought to others. Garth told Fox 13: ‘When you were with him, you felt like you were the only person in the world. I’m going to miss that.’

Logan showed no signs of illness last Friday night when he went to bed, but when his family noticed he was sleeping later than usual on Saturday, Rebecca, sent her eldest daughter to check on him. She found Logan unresponsive and the family said he had been ‘gone for hours’ by the time they found him.

Garth said earlier this week that ‘goofball’ Logan had no known health issues and was an active kid. The preliminary autopsy came back inconclusive, leaving the family still wondering what happened. 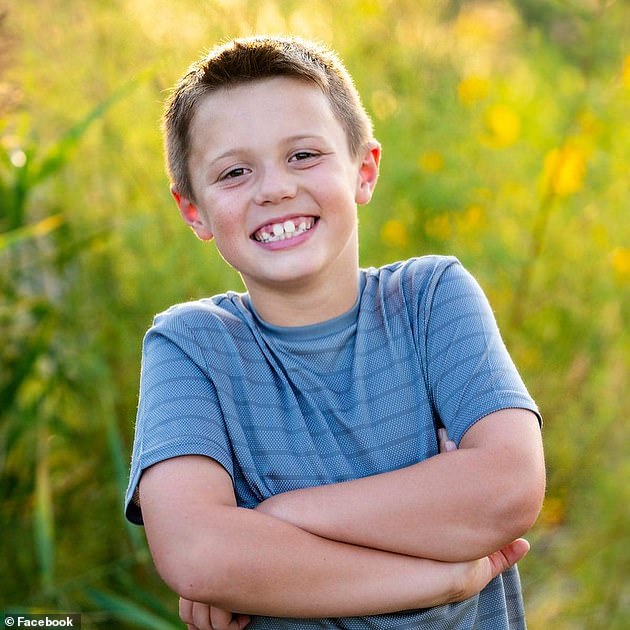 Logan’s cause of death remains unknown after the initial autopsy report came back inconclusive. It could be months before the family gets the final coroner’s report 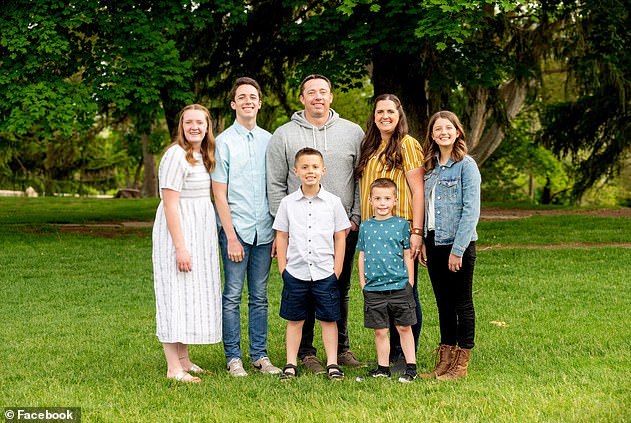 He was a seemingly healthy child who was ‘active’ before his death. His family said they will remember him for his ability to bring joy to others

‘He was healthy and he was active, so that’s what’s confusing and frustrating,’ Garth told KSL-TV earlier this week. ‘He was just such a personality in our family. He had so much left, I don’t know how we’re going to fill that hole.

‘Logan had so much to offer, because he treated people as if they were people.’

Logan loved playing sports, especially football, and was also was on Utah’s Junior Jazz basketball team, and planned to attend a youth basketball game this weekend. The family said they would go in his honor.

‘This is my nephew who was tragically and suddenly taken in his sleep. As we look for answers as to why this tragedy happened, we remember his huge personality and the many, many times he worked so hard to make us all laugh,’ his aunt, Camie Sheppard, wrote on her Facebook page.