Manchester City swept past Southampton with a scintillating second-half display to win 4-1 and reach the FA Cup semi-finals.

City have twice drawn against the Saints in the Premier League this season, but found their ruthless streak to book a Wembley date against Liverpool and keep their treble hopes alive.

Raheem Sterling gave the visitors the lead after Adam Armstrong struck a post for Southampton early on, although the hosts deservedly equalized in first-half added time when Aymeric Laporte turned Mohamed Elyounoussi’s cross into his own goal.

However, City moved through the gears in the second half once Kevin De Bruyne had converted a penalty. Substitute Phil Foden added a third with a perfect strike from the edge of the area and then Riyad Mahrez netted at the end of a lovely move.

City back on track

Pep Guardiola needed a response from his side’s disappointing draw at Crystal Palace on Monday and – despite a sloppy end to the first-half – he got that.

Armstrong was inches away from giving Southampton the lead when his shot came back off a post and Sterling punished the miss moments later by sweeping home from inside the six-yard box.

City then hit the woodwork from close range as Ilkay Gundogan connected with Joao Cancelo’s cross, but the visitors were unable to build on their lead.

Southampton: Ralph Hasenhuttl made four changes to his team that lost at home to Watford last time out.

Two of them were in defense as Jack Stephens and Tino Livramento came in for Jan Bednarek and Romain Perraud.

He also swapped his front line with Adam Armstrong and Shane Long replacing Will Smallbone and Chey Adams.

Ilkay Gundogan came in for Bernardo Silva in midfield, while Zack Steffen replaced Ederson in goal.

Southampton finished the first half strongly, grabbing the equalizer in added time when Elyounoussi broke in behind before seeing his cross deflect into the City goal by Laporte.

An end-to-end start to the second half eventually led to Gabriel Jesus being brought down in the box by Mohammed Salisu and De Bruyne snuck the penalty past Fraser Forster.

Southampton responded well with City needing keeper Zack Steffen to save from substitute Che Adams which proved crucial as Foden struck a stunner to add a third.

Two minutes later Mahrez, another substitute, found the corner after Gundogan had chested the ball into the winger’s path from Cancelo’s cross to put the tie beyond Saints.

Pep: Quality up front made the difference 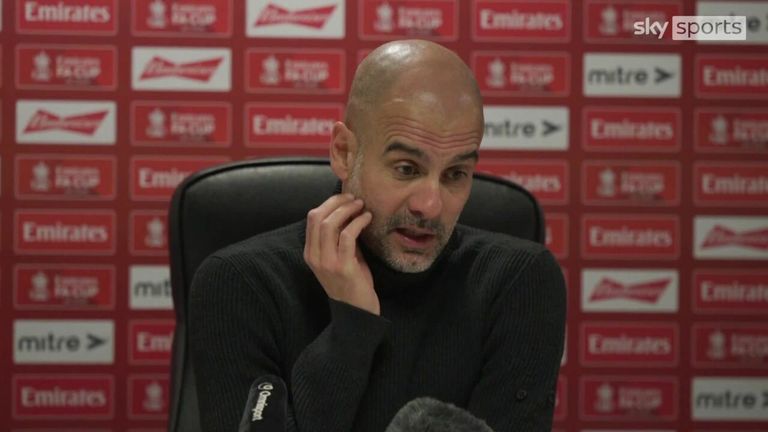 Pep Guardiola hailed the impact of his forward players – and is excited for the season run-in.

“We started really well and then we forgot to play, knowing that it’s so difficult because Southampton is one of the most organized teams we’ve faced this season, they push you with incredible intensity,” he said.

“The goal we conceded was a consequence of that. The second half was much better, they had a chance for Che Adams when it was 2-1, but the quality we had up front made the difference.

“After we come back we know what we have. Quarter-finals of the Champions League, Premier League two or three games, semi-final of the FA Cup, arriving in the later stages of the season we are there, it is nice.

“How many times has it [the treble] happened in this country? Once, in our lifetime. It is not easy.”

Hasenhuttl: We can be proud today 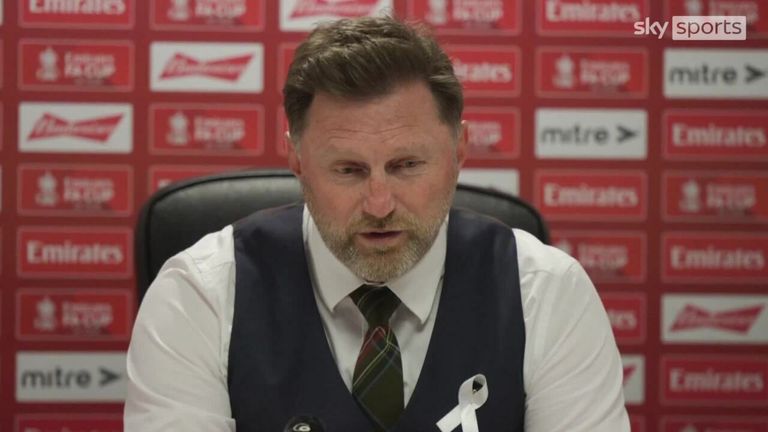 Southampton manager Ralph Hasenhüttl says his side performed well against Manchester City, but failed to take their chances

Southampton boss Ralph Hasenhuttl could not be downbeat over his side’s performance despite bowing out of the FA Cup at home.

“The goal when you’re playing such a game is to make it as difficult as possible, to let them struggle a little bit and that everything works perfectly then you have a chance to take the game,” he said.

“Two games this season against them we have taken a point, I think today we didn’t have a perfect game. I must say that we have played much better than the last home game against them when we drew.

“They were really on the back foot today, you don’t see Man City very often kicking balls long from the goal kick. That shows you how good we have been today and as soon as you come in such a moment you must take the chances you have and don’t give them easy moments to score and we did that twice.

“Until the 75th minute we have seen a very equal game, until that moment it was one of our best games against them but in the end it was not good enough.

“We can be proud of what we’ve done. I haven’t seen many teams playing against Man City like we did today.”

Man City will take on either Liverpool in the FA Cup semi-finals on April 16/17.

Southampton will look to complete a double when they head to relegation-threatened Leeds on Saturday having won 1-0 at St Mary’s earlier in the season.

Man City are aiming to do the same at Burnley, who they beat 2-0 in October, to keep their title hopes on track.