With global e-commerce sales poised to be a $5.5 billion industry this year, startups in the e-commerce enablement software space are looking to carve out a niche in this huge market.

One of those is Because, a startup developing no-code software connecting disparate data sources to automate high volumes of website updates.

Founder and CEO Ashland Stansbury explained that e-commerce companies are spending a collective $1.3 trillion to drive traffic to their websites, but only 3% of that leads to a customer purchase. In addition, the average business owner on Shopify is managing a large product catalog, often with over 50 products.

How content is typically updated is that a manager has to go into each website page and change anything manually, often leading to misinformation and mistakes.

Instead, Tampa-based Because, which was launched in November 2020, comes in to provide a “Canva-like” editing experience where e-commerce managers can design and publish messages, for example, about delivery and availability, promotions and shipping costs, aimed at driving conversion rates.

“We estimate a dozen to hundreds of hours are saved per month using Because,” Stansbury told TechCrunch. “It is also saving developer hours.”

Though some companies throw around the phrase “no-code,” they still require some coding ability, but Stansbury says Because does not. There is a campaign dashboard featuring different types of content and templates to pull from, very similar to Canva, and the manager can automatically fit in the brand and colors of the store and then change font, text or colors, and drag and drop to see what it would look like live. 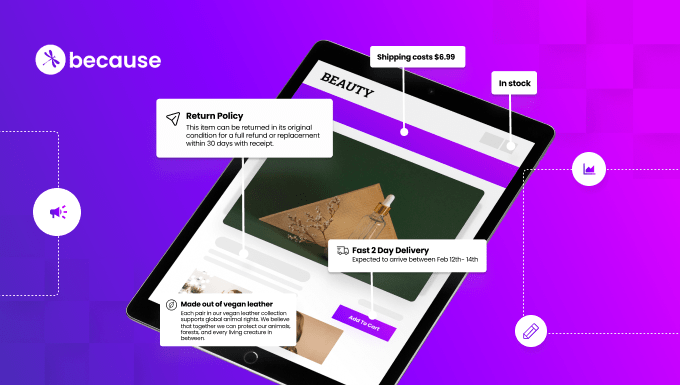 Because’s “sweet spot,” so to speak, is its rules engine for inventory. Instead of having to go product by product, the engine shows only products with an abundance of inventory or just a few left.

Within the e-commerce industry, the e-commerce software and platform market is expected to be valued at nearly $4 billion in 2022, and triple that by 2032. Companies like Melonn, CommerceIQ, CJ Dropshipping, Gelato and Moonshot Brands are also operating in this space.

Because raised $650,000 in angel investment last year, which enabled the company to grow to over 900 merchants and 150 paying customers.

Now armed with a new infusion of capital, a $3 million seed round, Because plans to grow its product and team; build out integrations with additional c-commerce platforms like Klaviyo, Smile.io and ShipBob; and leverage artificial intelligence to predict the exact message site users need to purchase and to compare their results against other stores in similar industries and geographies.

Harlem Capital led the round, and this is the third investment from them we have reported on in a month, which includes Drip and Glow Labs. Joining Harlem in the investment are Studio VC, North Coast Ventures, Gaingels and angel investors, including certain former Shopify executives.

Meanwhile, Stansbury says Because can drive an average of 38% increase in cart rate, typically in the first 90 days of integration. Her addressable market is quite large already — it is currently on Shopify, where there are over 700,000 merchants with 50 products or more to manage, she added.

“Growth has hit a real-life hockey stick, and it has been a team of myself and two engineers for the last year,” she added. “Now we will be investing in sales and marketing and rounding out the leadership team with a head of product and head of sales.”