Four European entrepreneurs have launched a €250mn fund to back tech start-ups across the region, seeking to disrupt the traditional venture capital model by creating a peer-to-peer investment platform.

The group aims to invest in more than 25 start-ups over the next 18 months, taking early-stage stakes of between €1mn and €10mn. If successful, Plural will enlist dozens more entrepreneurs as investors and raise bigger funds to boost the European start-up sector.

The move comes during a tech downturn which has led many VCs to slow investment, complaining that it has become difficult to value start-ups at a time of turmoil in public and private markets.

But Hinrikus, who last year floated Wise in London at a valuation of close to £9bn, said the fund was a response to the European start-up sector beginning to mature like Silicon Valley, with one generation of successful entrepreneurs backing the next.

For example, he said, some of the earliest Estonian employees at Skype, the video telephony company that was bought by eBay for $2.6bn in 2005, had gone on to found other successful start-ups in Estonia, such as Wise and Bolt, which both became “unicorn” businesses, valued at more than $1bn.

“Now Estonia has 10 unicorns — one for every 130,000 of our population compared with one for 7mn in China. Start-ups have had a GDP-level impact in Estonia. We want that to apply to all of Europe,” said Hinrikus. Although the current downturn in the tech sector might have dented short-term valuations, it would not overturn the longer-term trend, he said. 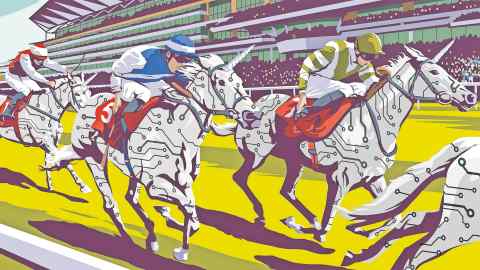 Plural’s four investment partners, who have together committed more than 10 per cent of Plural’s capital, will each find and sponsor deals without formal sign-off from an investment committee.

The fund is also looking to land a total of 10 entrepreneurs as investors by the end of the year. Only 8 per cent of the partners in European VC firms were entrepreneurs compared with more than 50 per cent at comparable US funds.

Rival VC companies question whether successful entrepreneurs make the best investors. They also argue that venture funds benefit from a mix of investment partners, including professional fund managers and MBA-qualified financial experts from investment banks, who can best structure deals at later stages. Some US VC funds, such as Andreessen Horowitz, started out as entrepreneur-led firms but have since broadened their pool of partners.

Hogarth said he had not found VC firms’ “spreadsheet jockeys” very helpful when he was a founder. The four Plural partners called themselves “unemployables” because they did not fit into traditional companies and wanted to pioneer a more decentralized investment approach.

“We do not like hierarchy and most VC firms thrive on hierarchy. The only way we can impact hundreds of start-ups is to expand the number of unemployables,” Hogarth said. “The most extractive way to run a fund is to have a small number of partners managing the biggest amounts of money. We want to do the opposite.”

Although Plural will be agnostic about which sectors to back, it will actively seek out founders from marginalized communities who find it difficult to access money. “What is exciting about Europe is the level of untapped potential. Incredible founders can come from anywhere. You need to pick people who do not fit the traditional pattern matching of VCs,” said Helioui.

As an example, he cited Mos, a fintech company in which Plural has already invested, founded by Amira Yahyaoui, a Tunisian human rights activist who was for a while an illegal immigrant in Europe. Yahyaoui has since moved to San Francisco, where her company has been backed by big VC groups such as Sequoia.

“In Europe, they could not imagine investing in an outsider, a woman, an immigrant who did not have a college degree. But I did show grit and lateral thinking,” she said. “I think Plural has a chance to do things differently. You don’t have to be called Louis or Xavier or Benoit to succeed.”