No matter when it was actually done — a couple of months ago, according to Jesse Marsch — there was a realistic tone to parts of Andrea Radrizzani’s latest interview in Italy. Leeds United need more money, he told Corriere della Sera on Boxing Day. To discover next-level football, they need next-level investment. And that money won’t be coming from him.

It is hardly a newsflash to read that cash is king in the Premier League — and nor was it a bolt from the blue to learn that Radrizzani, in his words, was close to the “end of the cycle” at Leeds — but how better to sum up the year the club have gone through than to say that change might be a good thing? Ownership in football is the game that never ends, a game that few can crack completely. Radrizzani is at the point of telegraphing his own exit.

Some regimes, naturally, have the money to fly further than others — in certain instances because they are regimes or thereabouts. Exhibit A was Manchester City, easily victorious at Elland Road last Wednesday, and Exhibit B was Newcastle United, Leeds’ hosts on Saturday and a team who are driving on Saudi cash.

Nobody is pretending that 49ers Enterprises, the group waiting in the wings to buy out Radrizzani, plans to throw the wealth of an oil-rich nation at Elland Road but the baton passing should be the next step for Leeds, the next piece of progress, a stronger bet going forward.

Newcastle are Newcastle, St James’ Park the same as ever, the Strawberry pub over the road full of the same drinkers who have always supped there, but it was impossible to visit without thinking of the poison infecting the stadium the last time Leeds visited in September 2021. The story then was of Steve Bruce and Mike Ashley, two men with next to no allies on Tyneside, but life has changed in the north east and so has the mood.

Following Newcastle’s visit to Elland Road in January 2022, at a time when they looked like being relegated, Eddie Howe’s side have registered 68 points from 34 games, one of them in an exhausting goalless draw with Leeds on New Year’s Eve. Leeds have taken 32 points in that period and the fact that they have played one game fewer barely alters the contrast at all. Only one of these sides is pleased to see the back of 2022.

They are, in essence, two clubs who want the same thing: the competitive strength that goes closer to matching the size of their fanbases, the scale of their grounds and their perceived place in the hierarchy of English football. That Newcastle are getting there faster is not solely about money. Howe has his squad on strings and his players look very happy on those strings. He has the approval of the crowd in the way that Bruce did not.

There is an executive framework at St James’ Park now, a proper structure. But financially, they have moved into a transfer bracket above Leeds, the transfer bracket Leeds need to home in on. Ashley would try and keep the peace by throwing the locals the odd Joe Willock. Now Newcastle can drop £60million-plus ($72m) on Alexander Isak. That, so often, is how new eras begin to fall into place, how impetus appears.

As Radrizzani put it, it is not that Leeds in their current state cannot grow a little more than they have. It is simply that a little more growth is of limited value and will not free them from the cycle of trying not to get sucked into danger season after season. They averaged under a point per game in 2022. 2023 begins with a home match against West Ham which Leeds cannot spray up the wall. A point at St James’ Park, though, could be precious to them, provided a good result on Tyneside is not allowed to sit in isolation. 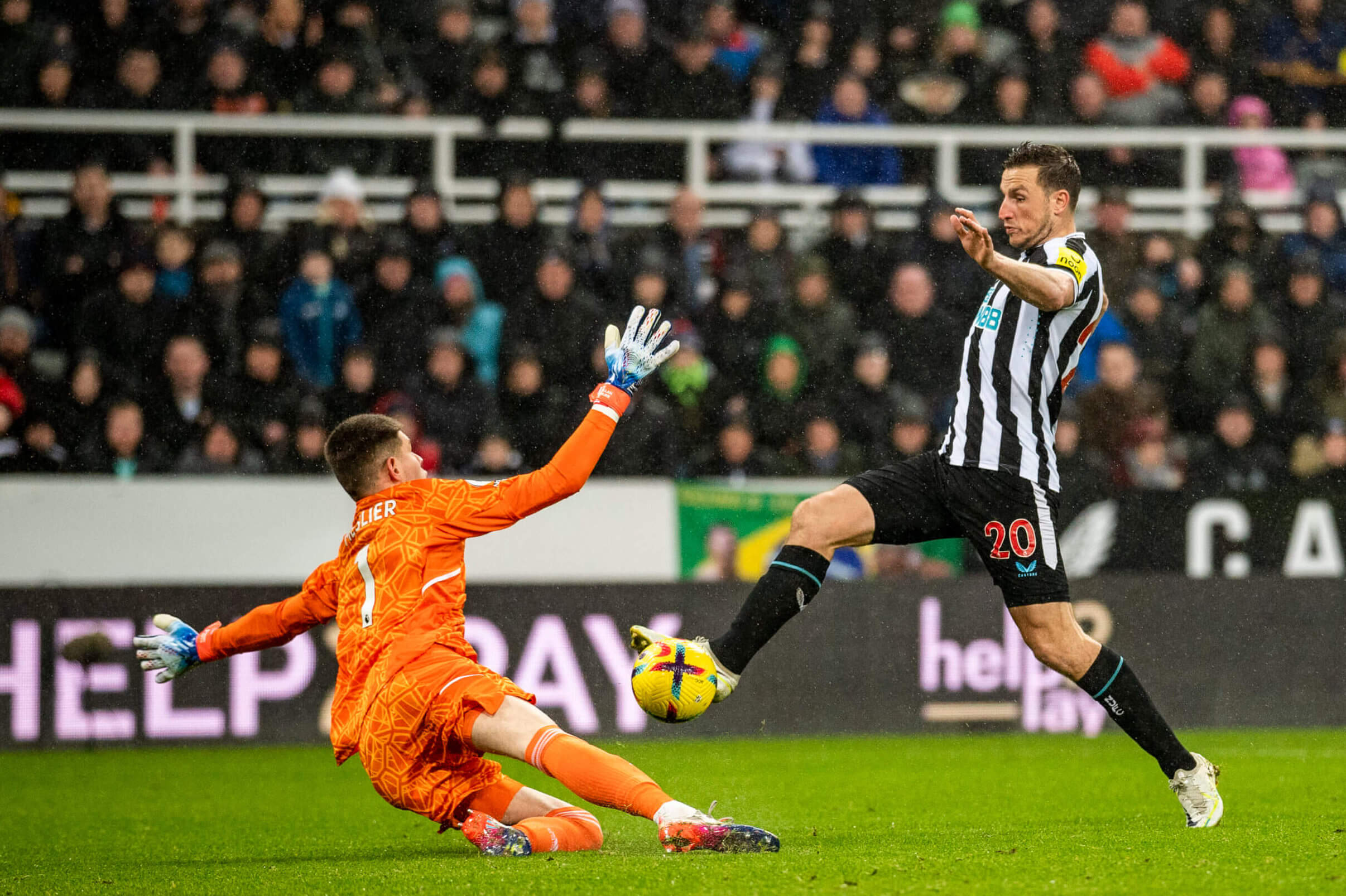 Meslier was crucial for Leeds against Newcastle but investment is needed for the club to grow beyond trying to survive in the Premier League (Photo: Richard Callis/MB Media/Getty Images

What went on at Newcastle was the definition of attritional, in the wet of a monsoon which cracked on without stopping from minute one. No one in Marsch’s camp was arguing with the scoreline — and least of all him. That Newcastle were unhappy with it and felt short-changed was shown by the scuffle started by Callum Wilson’s push on Illan Meslier in injury time, as it became apparent that the hosts’ big chances had passed them by and Leeds’ defense would hold out.

On a day when Everton went to Manchester City and successfully fought the odds, it was incumbent on Marsch’s side to do the same and keep the table ticking over.

Tyler Adams made a difference to Marsch’s midfield, back from suspension, on hand to stick a foot in and stop Newcastle having their way unopposed. Meslier made key saves and Newcastle wasted some excellent opportunities as an even first half ran into a second which Howe’s side controlled completely. Increasingly, Leeds hunted for the sort of smash-and-grab instance which arrived when Rodrigo got away with Mateusz Klich unmarked to his left, only to overhit his pass badly.

“In the first half, for me, we played very well,” Marsch said. “Second half, they decide to play direct and it then becomes about momentum and energy. It was about bending but not breaking and in general I thought we did that very well.”

Bending but not breaking was how it was for Leeds in 2022, pushed dangerously close to the edge in May before finding a path out of relegation and surviving to fight another day. The jeopardy has not faded and it has been notable this season that Marsch’s natural exuberance and optimism have turned more and more into comments about the stress of the job he is in — stress which is easy enough to see and very hard to envy.

As a club, Leeds have lived through too much of it in the year behind them and that must be the wish as they enter 2023 — for something that changes their trajectory again and looks less like a holding pattern.